A long time ago, on a little farm on the Canadian Prairie, I became part of a killing machine.

We had just moved onto The Farm and there was a nice new barn.  I'm not sure who decided to raise chickens that summer - something about a sibling's scheme to get money to go to University that fall.

The first batch of 250 chicks was exciting.  The second batch of 250 soon after was surprising - they must have gone on sale.  Too many.  They outgrew the barn quickly - what a mess!

I'm not sure how it happened, but when it came time, my Dad and I were the only ones out at the kill zone.  We got more efficient every time we had another kill.  We'd knock them down and quickly wrap twine around their feet so we could carry as many as we could lift out to the kill zone.  The killing itself was quick and horrible.  As was the rest of the nasty process of plucking and gutting.

Day after day of it.  We didn't raise chickens again.

Years later, in 2002, I was working at my studio table and noticed that a memory strip and a nearby bit of tin looked like two parts of a bird.  The head was a couple of pieces of scrap tin my Dad used to show me how to use rivets.  I put them together to make "Chicken Gets A Backbone" - shown here overlooking the kill zone (highlighted in red) from The Farm.  It is a sort of emotional self-portrait. 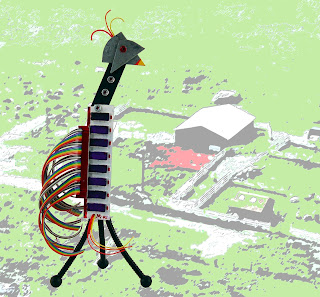 "Chicken Gets a Backbone" on The Farm

People liked "Chicken Gets a Backbone" so I made more and sold or gave away most of them.  I didn't keep good track of what I now call the 1st Flock.  Unlike the first bird, their heads and bodies could be moved and were clumsily adjustable.

I redesigned them so they could be easily locked into various poses and replaced the tin heads with read/write heads from hard drives.  I started to think of them as karmic erasers for all the chickens I killed back on The Farm and the Chicken Karma Project was born.

That 2010 batch became the 2nd Flock, 19 birds complete with leg band identifiers, adjustable with thumbscrews at three points.  Several flew to friends, a few are in a show at The Harrison in Indianapolis March 2-30, 2012 and the rest are ready to fly to new nests.

I added adjustable head gear and recently finished the 3rd Flock of 10 birds.  The 4th Flock is on the drawing table.

See them all soon at marilyngatin.com

Thankfully I have had to do only mercy killings since that summer - a wounded bird on the side of the road, pets.  Obviously too soft to be a farmer, but I can make birds that are ever-changing sculptures.  These ones are a lot of fun and, most importantly, don't die.

I'm not a religious person, but that's still good karma.


Posted by Marilyn Gatin at 2:55 PM No comments: